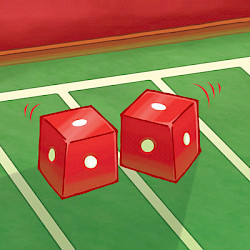 One of the most innovative and impactful mechanics of the Munchkin Collectible Card Game is cheating. It adds a layer of complexity that makes this game truly special, so it's important to more closely examine what it means to cheat in the Munchkin CCG and how it can be used effectively.

Cheating, in the Munchkin CCG, means to commit a non-monster card to a fight, or to commit a monster card to a fight without paying enough gold to hire that monster. If I have been "caught cheating," I take one damage, move the revealed card to my stash, face down, and take back the gold I committed to the face down card. There are a couple of reasons why one might do this:

Cheating potentially reduces your opponent's defenses at the cost of one damage, which raises the question: what's the downside? If I can cheat my way to dealing more damage than I take in a given turn, what risk do I need to weigh in relation to its potential reward?

First, your opponent doesn't have to take the bait and can choose to face your cards without committing any resources. To cheat effectively, a player needs to be able to read their opponent's behavior patterns while simultaneously assessing the risk of being wrong. One damage each time you are caught cheating may not seem like a lot, but in many games just one damage can make all the difference. 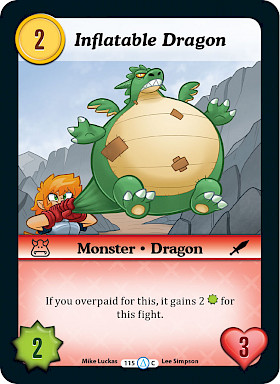 There are also times where you meet an opponent who might force you to adapt your normal playstyle. I consider myself to have the ability to read people well, but I have a very difficult time successfully cheating against one particular good friend of mine. No matter what, he seems to always know when I am cheating and is able to get me to commit my allies and weapons against cards he's cheating with. My response: I no longer cheat against him unless the risk to me is minimal. There will be some situations where I can cheat with a card and take one damage but know that no matter what, my opponent is going to take three or more damage, or Limp Away. In those situations, I may push him to assess whether he should take the Limp Away damage or risk there being a four-damage Inflatable Dragon in the DMZ.

The more effective you become at using the cheating mechanic, the more you become aware of your own behavioral patterns. I may start my first three turns by cheating so that my opponent gets in the habit of thinking I'm always bluffing with the first card I commit to a fight, then play a powerful monster as my first committed card on the fourth turn. If my opponent thinks I’m following my usual pattern, they may choose to face my "cheated" card and open themselves up to a world of hurt when it turns out to be an actual hired monster.

As a final note, some players have expressed reservations related to the word "cheating." Really, however, what you are doing is bluffing. Other traditional games, such as poker, are all about bluffing – you try to figure out your opponent's decision-making process and do a risk assessment of what your odds of winning the hand might be. You have the potential of winning even with a losing hand – and it’s not playing outside of the rules, it’s one of the elements of the game that makes it most fun. The Munchkin Collectible Card Game is the same way; you certainly can play without cheating (or bluffing, if you prefer), but it’s one of the elements that makes this game fun, and it can be a powerful tool when you learn to use it effectively.