Strut your strategy with these new cards from the Fashion Furious expansion – coming in August! 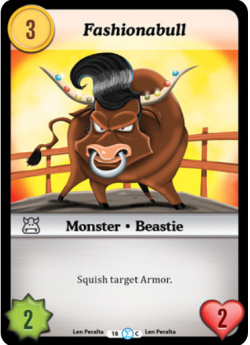 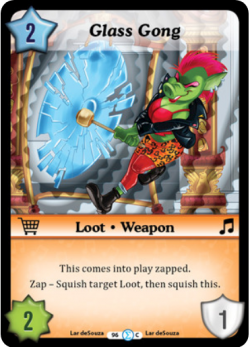 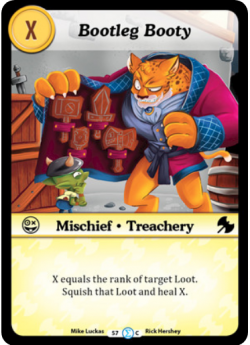 Get ready to fight over some great booty. The Fashion Furious expansion features a treasure trove of runway-ready Loot and fierce Monsters worthy of even the most Fashionabull players.

The Munchkin CCG has never looked this good. This 124-card set comes packed with 39 Loot cards you'll want to walk down the runway, 40 Monsters to model them, and tons of other enviable goodies.

Take, for example, the Fashionabull himself. This 3-cost Monster has a power and a health of 2. But he gets to squish target Armor the moment he’s hired. You can bet the Dwarf Cleric won’t want to see this bovine hired by an opponent – not if he wants to keep The One Bling or Robe of Retribution in play. So if there’s a Cleric player whose power you want to strip, this may be the bull for you. 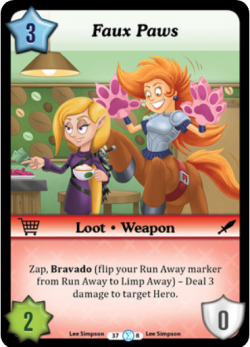 Two other new cards can squish Loot. The Glass Gong, an Orc Bard Weapon, can take out your 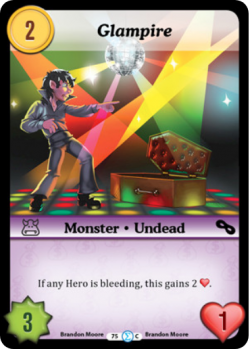 opponent’s Loot card, though it also takes itself out. And Bootleg Booty, a Cleric Mischief, squishes a Loot with rank X for X gold. The Cleric then heals X, too! That could be a great way to take the fight out of a weapon-focused Centaur Warrior deck, or the luck out of an Elf Thief who’s using the Lucky Giant’s Toe.

The set also introduces a daring new keyword: Bravado. These are abilities that require a player to flip their Run Away marker to Limp Away as payment, so they’re powerful – but not for the faint of heart.

Faux Paws, which has an optional Bravado ability, can be used for a great finishing move. Zap this Centaur Warrior Weapon and flip your Run Away marker to deal 3 damage to finish off your opponent, and it won’t ever matter that you can’t run away next turn!

Of course, this set has its share of meat-and-potatoes cards, too. The Hurling Iron is a neutral rank-2 Weapon with a power of three and a defense of one. So if you’ve been waiting for a low-rank Weapon that’s a lot more offensive than defensive, be on the lookout for this one. Just be sure to duck if it comes flying at your head!

The Human Wizard gets a new Mischief card, Underground Monster Fight, that can net him 2 gold. That will help to fund his expensive mischievous endeavors, such as Kaboom!. 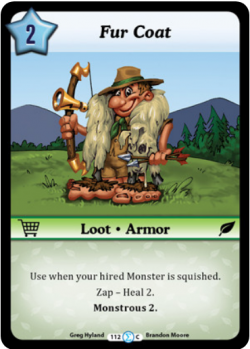 Meanwhile, the ever-fabulous Elf Thief is up to some of her 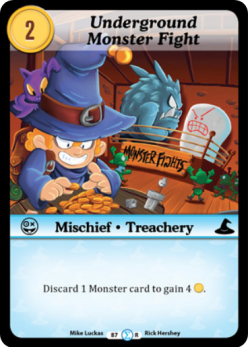 old tricks. The Glampire joins her ranks of Monsters that play off of Bleeding. This 2-cost Undead Monster goes from 3-power to 5-power if any player is suffering from that effect. The Glampire is sure to pair well with the Combo Rat and the Wombo Bat.

When Fashion Furious comes out in late August, you can pick up the Glampire, the Fashionabull, a Fur Coat or two, and tons more cards to put together your sartorial strategy.

But for now, don’t forget you can still sign up for either of the National Qualifier Tournaments at GenCon 2018; there's one on Thursday and one on Friday. The top 32 players at each tournament will get a full set of six enamel class pins; and if you qualify, and play in the National Championship Tournament on Saturday, you'll have a shot at winning an extremely shiny acrylic Fashion Furious-themed dial. You can read more about the prizes here.

Finally, make sure your local area has a Fashion Furious Release Event! Stores that sign up to run them will get copies of two never-before-seen promo cards, the Malfunctioning Machete and the Lame Duck. To help your local store get signed up, tell them to email retailers@sjgames.com, and we’ll take it from there.