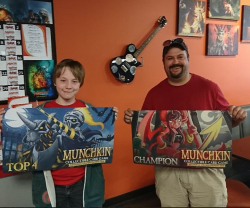 The Munchkin Collectible Card Game is in the middle of a wonderful first season! Already this year, we’ve released one expansion for the game – with two more on the way. To give you the chance to see how your constructed decks stand against others, we created the 2018 Regional Championship Tournament Series!

The Regional Championship Tournaments were held in late May and throughout June all across the U.S. (plus one in Canada). Players got some super sweet loot, like exclusive branded token bags, poker chip-style Run Away tokens, plus Champion playmats for the first place winners at each event. Those who placed first or second at their regional level qualified for seats at the National Championship Tournament, which will take place during Gen Con, on August 4 and 5.

We know you’re excited to find out what the winning decklists were in the Regional Championship Tournament, so here are a few highlights!

James won first place with a Dwarf Cleric deck while playing the Munchkin Collectible Card Game at Guardian Games in Portland, Oregon. This deck had an even proportion of Monsters, Loot, and Mischief, which allowed James to take out his opponents:

Jason came in second place at Guardian Games; his Elf Thief deck had a balanced number of Monsters vs. Mischief:

In Gautier, Mississippi, Dylan nabbed the win with an Elf Thief deck during the Regional Championship Tournament held at maCnarB Gaming. His Elf Thief was heavy on Monsters, while still allowing room for Loot and Mischief:

Roger placed second with an Elf Thief at maCnarB Gaming. His deck was similar to Dylan’s in that it focused on Monsters; however, it had no Allies:

In Valdosta, Georgia, Christian placed first with a Human Wizard deck at Funertia. Christian incorporated more Monsters than you would normally expect in a Wizard deck, which helped him give his competitors a double whammy. Check out what he did with this wily spellcaster:

Finally, we held a Regional Championship Tournament in our Steve Jackson Games Room during Origins on Saturday, June 16. This time, Bayne was our victor with a very interesting, slower Elf Thief deck, in which he incorporated only one type of Monster:

Richard also played an Elf Thief at Origins, but his deck had an even number of Monsters and Mischief, while protecting himself with eight Ally cards:

We’ll be holding two additional qualifiers on August 2 and August 3. These will start at 12 p.m., and there are limited seats available. If you are thinking about going to Gen Con but you haven’t made your mind up yet – hurry! At least the top 4 winners of these two events will receive invitations to play at the National Championship Tournament, and participants will get some sweet prizes as well. These include full sets of Class pins for the top 32 players, and a vibrant The Desolation of Blarg Ultra PRO Playmat for the top 16 players!

Our players have been hard at work putting their decks together, and these will be put to the test at our National Championship Tournament!

This will be a constructed deck tournament, and it will take place August 4 during Gen Con. There will be five rounds beginning at 10 a.m., and winners at this tournament have lots of premium prizes to look forward to. The top prize will even include an artist’s rendering of our victor’s likeness being included on a card in the Munchkin Collectible Card Game!

While the winning Elf Thief decks featured in this article incorporated this Hero’s original ability, we recently updated the Thief errata. If you are planning on competing with this sneaky Hero, make sure that you practice with the new Elf Thief ability!