Get loot and test your skills at our GenCon tournaments! 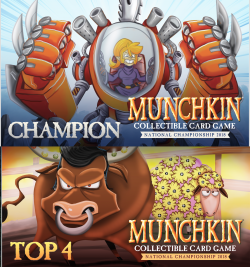 Calling all Munchkin Collectible Card Game fans who are going to Gen Con 2018! Sign up for a Qualifier Tournament now (on Thursday, August 2, 2018, or Friday, August 3, 2018) if you want to win a spot at the National Championship Tournament at Gen Con on Saturday, August 4, 2018, at 10 a.m.! Victory at the National Tournament scores you lots of great prizes – not to mention bragging rights that you’re the best Munchkin CCG player around.

Oh, and … you’ll get your likeness drawn into the game!

This event will also be the first official tournament with the new Elf Thief errata in effect, so it’s going to be a blast to see which decks work best! We plan to have a ton of fun at this event, and expect to see some great games. You can search for “Munchkin CCG” events (we’ve also got draft events all throughout the show!) here, or go directly to the Thursday Qualifier or the Friday Qualifier.

Join us in Brawlhalla, and get ready to rock and Rawr! ! It’s sure to be a Dynomites good time – an event of Squidzilla proportions!