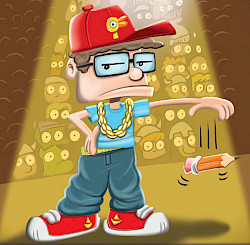 If you've ever played Munchkin, you know the work of John Kovalic. He's worked with us on this monster game since its birth in 2001, and he has illustrated more than 5,000 cards during that time. Outside of the Steve Jackson Games universe, he’s the creator of Dork Tower, an Academy of Adventure Gaming Arts and Design Hall of Fame inductee, and the co-founder and co-owner of Out of the Box Publishing, a company that you might be familiar with if you’ve ever heard of a "little" game called Apples to Apples.

John Kovalic has been associated with Munchkin since the beginning, so including him in the Munchkin Collectible Card Game was a no-brainer! He illustrated the game's Neutral cards, which can be added to any deck regardless of its Class. Now that we have released the Munchkin Collectible Card Game, I caught up with John to get his thoughts on illustrating something that is so new, yet familiar.

You've illustrated thousands of Munchkin cards! How would you compare drawing for Munchkin versus drawing for the Munchkin Collectible Card Game?

This was a very different experience. There was a lot of up-front character design and development, which was great. On an average Munchkin project, I'll have to start drawing a day or two after the art specs come in. This time, I had plenty of time for sketching and developing the six main Heroes, to set the tone for the rest of the game. The very first versions of them were very similar to Munchkin, but eventually they started taking on their own look and feel.

Were there any challenges illustrating for the Munchkin Collectible Card Game that you didn’t run across with Munchkin or vice versa?

Knowing that the cards would be painted, I tried to add more background details to them, to make them a bit more three-dimensional than a card that would appear, say, on Munchkin Shakespeare.

What influenced your design for the Neutral cards?

Honestly, though, I wanted to try to keep them similar enough to classic Munchkin cards that somebody picking up a Munchkin Collectible Card Game starter set would still get a Munchkin vibe from them. They're sort of the gateway to all the other great artists' work on the sets.

Instead of my usual inking pens (Faber-Castell Pitt Artist Pen, Fine Point), I used more of a brush pen on the CCG cards, which I hoped would loosen my drawing style up a little bit.

What was your favorite card to illustrate? 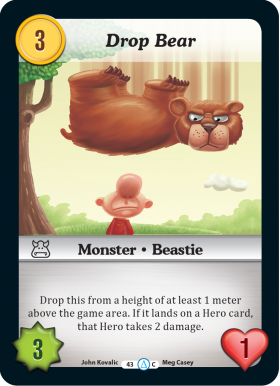 I think Budget Sasquatch turned out nicely. And it was nice revisiting cards like Mr. Suitcase and Leperchaun again. But I think Drop Bear may be my favorite. (If any Australian conventions invite me over because of it, it will ABSOLUTELY be my favorite, then.) (See also: Wombo Bat.)

What card was the hardest to illustrate? 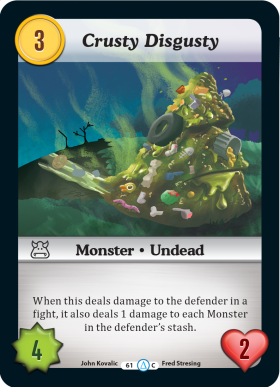 Honestly? I kind of hate drawing the Gazebo. And it's something I've had to draw many times, in different Munchkin iterations, over the years. But "hardest"? Probably all the gross detail on Crusty Disgusty.

Each time I look at the Chainsaw of Bloody Dismemberment card, I shudder a bit because of the sheer amount of blood in it! Are there any other cards you wish were just as gory?

I used to think so...then I saw Greg Hyland's Munchkin Zombies Guest Artist Edition. So I think I'm OK with Greg being the gory one.

Kova is a Monster card based on yourself! What is it like to be a Monster in the Munchkin Collectible Card Game?

If I truly was a monster, I'd win more games of Munchkin. (Still only won two, in sixteen years). Of course, I got my revenge on Eric Lang, who designed the Kova card, by getting to draw him a couple of times in the game.

Is there something you loved, including in any of the Neutral cards, that you want fans to keep an eye out for?

My signature. BACK OFF, other artists!

Ummmm...OK. Seriously: the in-jokes. I love adding little in-jokes in the cards I draw. My favorite one from the CCG is Explodia, The Trademarked One -- who has four fingers and a thumb on its "head." Munchkins, of course, have THREE fingers and a thumb. At least when I draw them. Hence the confused munchkin in the background.

(Adding to the confusion, Explodia's hands themselves have only three fingers each). 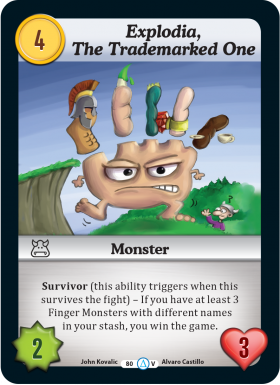 What projects are you currently working on?

Well, of course, there's Munchkin <Redacted>, as well as Munchkin <DOUBLE Redacted> and Munchkin <REDACTED SO HARD, THE SUN WON'T SHINE>. Those are ALL very exciting!

(As with most Munchkin projects, I can't say, until they are announced. But I believe there's a big announcement coming soon, and it's one I'm tremendously excited about).

Other than Munchkin, it's the 20th anniversary of Dork Tower, my comic strip, and that's a lot of fun. There are some new editions of the books out, new comics going online every week, and lots of fun stuff. Pop on over and help us celebrate!

I hope reading everything John Kovalic had to say about illustrating for the Munchkin Collectible Card Game made you even more excited about getting your hands on this game! You can purchase the Cleric & Thief, Wizard & Bard, or Ranger & Warrior starter sets at your friendly local game store. You’ll enjoy all of John Kovalic’s punny illustrations while using the Neutral cards to squish your opponent!