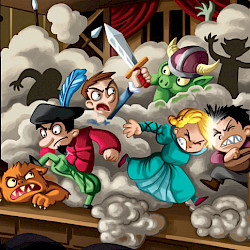 In the Munchkin Collectible Card Game, everything you do has one purpose: to defeat your opponent in battle! You can hire Monsters to deal damage and commit Loot during a fight to avoid taking damage, but don’t forget about adding well-timed Mischief to your game. Mischief cards can certainly mess up your opponent’s plans and make every game a surprise, since they contain some very underhanded ways to secure a victory.

What's in a name?

Mischief cards are one of the six types of cards in the Munchkin Collectible Card Game. Currently, there are three subtypes of Mischief cards: Treachery, Curse, and Interrupt. Mischief cards with a Treachery subtype have plenty of ways to mess with your opponent. Those with a Curse subtype stick to other cards and cause an effect that lasts until the card they’re stuck to leaves play, or the Curse itself leaves play. Finally, Mischief cards with an Interrupt subtype cause trouble in a different way, since you have to deal with their abilities as soon as these are played. You must suspend other actions or abilities until the Mischief card with the Interrupt subtype or ability is fully resolved. Interrupts can be played at any time after the active player’s Unzap step of the warmup phase.

Mischief is as Mischief does. 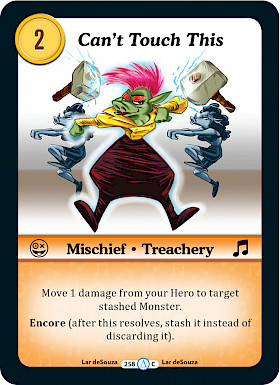 Mischief cards offer a wide variety of gameplay effects. They can ignore another card’s ability, prevent damage, heal damage, force your opponent to zap cards, force your opponent to draw cards, outright squish your opponent's card, and also help you draw cards, among other things. Mischief cards can be played on your turn and during your opponent's turn, after the active player's Unzap step and until their cooldown begins, as long as you pay the gold cost. You can usually use Mischief cards only once before discarding them. However, there are some that you can stash instead, like those in the Orc Bard's deck that contain Encore (which is discussed in more detail below). 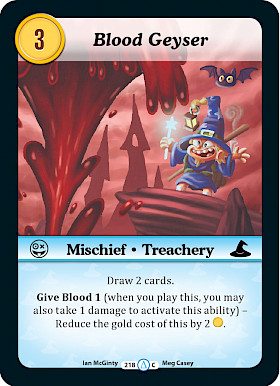 Every Hero in the Munchkin Collectible Card Game has Mischief cards that help them stir up plenty of trouble. The Orc Bard and the Human Wizard have the most Mischief cards in the Season 1 core set, though they approach them differently. The Orc Bard uses Encore to replay cards over and over again by stashing some of her Mischief cards instead of moving them to the discard pile, while the Human Wizard can Give Blood to make some of his Mischief cards more powerful or cost less gold. Although the Halfling Ranger, Centaur Warrior, Dwarf Cleric, and Elf Thief have fewer Mischief cards in the Season 1 core set than the Orc Bard and Human Wizard, their Mischief cards often include abilities that beef up their strengths. For example, the Centaur Warrior can use All Teh Blades to look through her deck for a Weapon card to add to her hand, while the Halfling Ranger can use Tracking to look through his deck for a Monster card to add to his hand. Similarly, the Dwarf Cleric can use Healing Salvo to heal the amount shown on a die roll and outlast his enemy, while the sneaky Elf Thief can trick her enemy with a well-placed bluff during a fight, then play the Stabbity Stab! Mischief to deal 2 damage when they run away.

The best defense is a good offense. And vice versa!

Although Monsters can come back each turn to attempt to deal damage as long as they aren't squished, one of the advantages of using Mischief cards is that, unlike Monster cards, they can't be blocked by Loot or Allies.  Also, you can deal damage using Monsters only during your munchkining phase, and plenty of Loot cards (like Weapons) can be committed to a fight only to defend and deal damage to your opponent's Monster, not their Hero. Mischief cards offer flexibility since they can be used on your turn and during your opponent's turn, during the warmup and munchkining phases, to prevent taking damage or to deal damage. 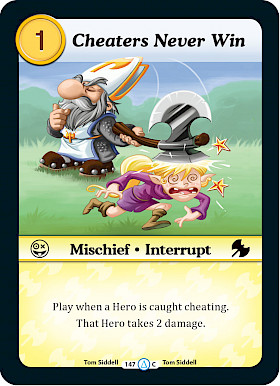 Mischief cards offer great ways to strategize against your enemy and come out on top. Their flexibility and abilities often result in unexpected effects that, when paired with the bluffing mechanism, make the Munchkin Collectible Card Game a new experience each time. When timed well, they can throw a huge wrench into your enemy's plans. After all, few things are better than seeing your opponent’s face when they’ve been caught cheating by using Cheaters Never Win!

I hope this article helped you learn how you can use Mischief cards to demolish your opponent during your next game. Pick the Ranger & Warrior, Cleric & Thief, or Wizard & Bard starter set to make some Mischief, and take a look at this card types article to see what other cards you can use in the Munchkin Collectible Card Game!