Spellbind Your Enemies With The Human Wizard! 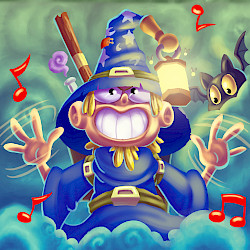 In this week’s “Focus on the Hero,” I’m introducing the master of magic, the coolest conjurer, the Human Wizard! The Human Wizard class focuses on powerful Mischief cards and ways to make them cheaper. Drawing cards, burning monsters – all this and more is at his fingertips!

The Human Wizard has a built-in way of saving gold on Mischief with his zap ability: reduce the cost of the next Mischief you play this turn by 1 gold. This makes some of his strongest effects more affordable. And more devastating. Cards such as Kaboom! can already knock out big Monsters or do a lot of damage to the opposing Hero, and the Human Wizard makes them even cheaper and easier to play. Zorch!, which normally deals 2 damage to a Monster for 1 gold, becomes a free card. Take that, Drop Bear!

The Human Wizard can also Give Blood, where he takes damage to make his spells cheaper . . . or stronger. That means that a Blood Geyser, which lets you pay 3 gold to draw 2 cards, will cost 1 less gold if you take a damage for the spell's Give Blood 1 ability. If you use his Hero ability as well, Blood Geyser costs you only 1 gold to play! Of course, using the Give Blood ability too much might make the Human Wizard a little frail when it's time to defend himself.

That’s not to say he can’t defend himself – he has some awesome Loot, such as the Stick of Suffering, a Weapon with 4 power that can take down most Monsters in the game. However, the Human Wizard must take 2 damage every time he commits the Stick of Suffering to a fight. His best options demand careful risk/reward management.

And all this is just in the starter deck! Once you’ve become a magical master, you can expand your deck with cards found in Munchkin Collectible Card Game booster packs! In them, you might gain a Weapon such as Magic Missile, which damages your opponent AND their attacking Monsters. Heart of the Cards offers the Human Wizard some versatility, since it can be hired like a normal Monster, or you can Flaunt it (reveal it from your hand and then discard it) to deal 2 damage to your opponent . . . and also to yourself. Being a Human Wizard ain't easy.

Pick up a Wizard & Bard Starter Deck when the Munchkin Collectible Card Game releases in February 2018! And for more on Mischief and Monster cards, check out this article!