Deliver a Sermon of Pain as the Dwarf Cleric! 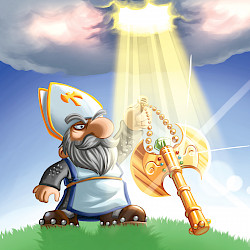 As the Dwarf Cleric, you have all sorts of tools to heal yourself, prevent incoming damage, and shove your pious Allies in the way of the biggest Monsters! Using these tools, you can slow the game down and survive just a little bit longer than your opponent. While you don’t often deal large amounts of damage, you can grind your opponents down.

As part of your arsenal, you have some powerful Loot at your disposal. The Robe of Retribution slings damage back at any Monsters that would dare deal damage to you. If your opponent pushes through your defenses, a well-timed Healing Salvo and a lucky die roll can deliver you from the pain. Smite Unseen can eliminate any Monster you're facing, but only if you can call your opponent's bluff!

Your Monsters can also do some tricky stuff with damage. The Angel of Awesomeness allows you to move existing damage to an opponent or to another Monster, bypassing many of the ways your opponent might counter damage being dealt. The Pygmy Suckophant's Life-O-Suction heals you whenever it deals damage. You, as the Dwarf Cleric, are always recovering, even while your foe is pummeling you.

Though you have only a few Class-specific Allies, Dr. Meow Practice is particularly nasty. It deals damage whenever you heal, making your opponent hurt even as you recover your own life. But since you don't have many Allies, the question to pose to yourself is this: should you throw Dr. Meow Practice into a fight to defend against Monsters, or should you hold it back and dole out punishment instead?

If you choose to play as the Dwarf Cleric, you're playing the long game. You must withstand everything your opponent throws at you while preparing to deliver a devastating counterattack late in the game. The only hit that really matters is the last one. If you play the Dwarf Cleric wisely, you'll never get squished!

The Dwarf Cleric is half of the Cleric & Thief Starter Set, and you can find more cards for him in the Munchkin Collectible Card Game booster packs!