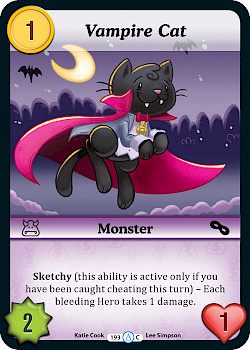 After you’ve played with the starter decks a few times, you should have a firm understanding of the basics of the game. But you also know that there are many more cards that you haven’t seen. It’s time to go out and buy as many booster packs as you’d like. After the glow of tearing open pack after pack and reveling in that new-card smell wears off, it’s time to sit down and make a constructed deck.

A constructed deck is a deck that you’ve put together yourself before the game. (As opposed to a draft deck, which you build from a small selection of cards that you receive in packs as part of the draft itself.) Your deck has to follow these rules:

Keeping those things in mind, here is a sample Thief deck:

Because the goal is to squish your opponent before they squish you, the general idea behind constructing a deck is focusing on one or two good ways to accomplish that. 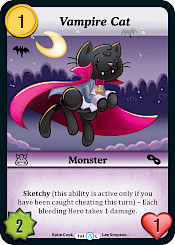 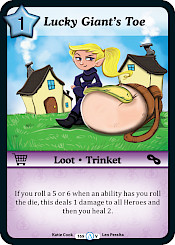 In addition to the slow damage of Bleeding, the Lucky Giant’s Toe deals damage to both players whenever I roll a 5 or 6. Honest Al’s Casino, Long Shot, Repeat Offender, and RNGesus make me roll the die, and Liar’s Dice lets me reroll, giving me more chances at a 5 or 6. This is mainly a backup strategy; winning solely with this would require me to roll well 20 different times while hoping that my opponent doesn’t have any healing.

In general, you’ll want around half of your deck to be Monsters: my deck has 18. I have 6 Weapons and 3 Allies, which means about a quarter of my deck is defense. This is a little low, but I made that sacrifice to try to fit in a few more Bleeding and die-rolling cards.

I could run into trouble against a deck that focuses on healing or big, powerful creatures, but otherwise this feels like a pretty solid deck. The only thing left to do with it is sit down and play!